“Creativity is characterised by the ability to perceive the world in new ways. To find hidden patterns, to make connections between seemingly unrelated phenomena, and to generate solutions.” (Anonymous)

In coaching, creative techniques are increasingly being used as a way of working with clients, with growing numbers of coaches exploring how they can integrate them into their practice. Often arts-based, approaches include the visual arts, music, poetry and dance. While the methodologies may differ, they share the inherent qualities of any arts-based method (ABM) to support clients in increasing self-awareness and creating meaningful shifts through:

Artistic expression always involves two forms of self-expression. One is a deliberate and conscious external creative endeavour. The other occurs because the process of creating something always unconsciously reveals aspects of the ‘self,’ no matter how seemingly insignificant. This…can be utilised to support clients in accessing a way of knowing that is internal and intuitive.

Enabling deeper connection to ‘self’:

Engagement with an art process necessitates a quality of attention that engenders flow and mindfulness. In these states, the client can stay with their exploration longer than they would otherwise, increasing the depth of their reflection and self-directed discovery (Falato, 2012).

The introduction of an arts approach, particularly for those not used to regular creative artistic expression, causes the brain to work in unfamiliar and diverse ways. According to Gray (2019), this can create new pathways, ways of thinking, feelings, and behaviours.

However, engaging with creativity, for both client and coach, can evoke markedly different responses. From joy grounded in confident creative self-expression, to sadness rooted in a sense of loss through a perceived lack of creative ability. Unfortunately, many people fall into the latter category and therefore find the idea of using creativity for learning and development daunting and beyond their capabilities. Again, this perception can relate to coach and client.

This belief is unsurprising, given that creativity was once thought to be a gift, or personality trait, belonging to a select group of exceptional individuals (often described as creative geniuses) meaning it still retains an air of mystique. Fortunately, extensive research and literature on the topic confirm that everyone possesses the capacity for creative expression. Therefore, it is possible to identify, nurture, and develop it as a skill.

The question is, how can we as facilitators work in a way that supports clients to explore and embrace their innate creativity within an environment of learning and development? An important first step is to understand the nature of the creative process and convey this to clients.

The Science Behind the Art

At its core, creativity involves a mental process and adopting an attitude of childlike curiosity that suspends preconceived judgements, takes risks, and remains open to new ideas. Creativity, therefore, does not necessarily lead to the production of a tangible output.

This explanation of creativity helps shift clients away from the misguided perception that creativity equals art and the ‘creative sector.’ As clients recognise that it’s a cognitive process combined with other characteristics, there’s an opportunity for them to begin exploring their own as they’re now aware that it manifests in diverse ways. From how they solve problems, organise their study more efficiently, utilise objects for a different function or choose to dress. This way of understanding creativity also draws on Beghetto and J. C. Kaufman’s Four C Model of creativity.

The Four C model distinguishes levels of creativity, not intending to test innate ability but to identify the degree to which an individual expresses their own (Helfand et al., 2016). While acknowledging that all are valid and valuable, this model suggests an increasing level of endeavour and output moves an individual through Mini, Little, Pro, and Big- C creativity. They stress the value of Mini-C as…a focus on the process rather than output, therefore removing the need for external judgement or acceptance. In this creative space, individuals deliberately encounter new information and experiences that enable them to grow and make progress that has significant personal meaning…while adding immense value to their lives and others.

Unfortunately, Mini-C everyday creative activities like the earlier examples, are often dismissed and overlooked, at least in Western cultures – including by those undertaking the act. Yet, the willingness to encounter new information and experiences results from remaining open to possibilities, staying with uncertainty, being vulnerable and allowing mistakes (or, as I prefer to call them, unintended outcomes). This is essentially childlike behaviour, as distinguished from childish, and is foundational to all creativity. Therefore, by acknowledging the value of these creative acts and   the underlying behaviours, coaches and facilitators can help themselves, and their clients, recognise and nurture personal creativity.

Ongoing research on the neuroscience of creativity reveals a cognitive process involving two large brain networks, the Imagination (IN) and Executive Attention (EAN), located across both hemispheres. A third, the Salience network, is responsible for passing information between the other two networks. With the IN expanding thinking and the EAN contracting it to evaluate and draw conclusions. 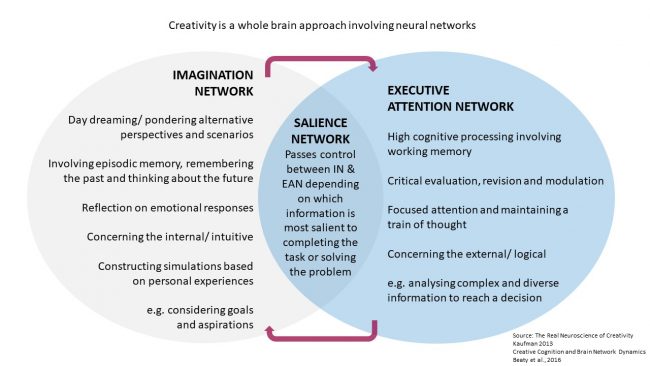 This research demonstrates how creativity is a whole-brained approach, rather than as formerly believed, pre-determined by whether you’re a right or left-brain thinker. Awareness of creativity as a fluid process, constantly moving between states and networks as necessary to complete a task, can positively impact a client’s relationship to their creative self-expression. The Collage Coaching Technique™ takes clients through such a creative process, as

each stage plays a specific role in flexibly activating or partially deactivating the brain networks involved in creativity. Firstly, allowing an opening of ideas, thoughts, and feelings followed by evaluation and verification. Significantly, as an arts-based coaching tool, it benefits from combining both experiential and cognitive creative processes.

“On the surface and when viewed as independent steps, the process of creating a collage appears simplistic, even childish, and belies the psychological significance of each stage. However, when understood and applied as an integrated and progressive approach, its ability to engender transformation is quite extraordinary. Indeed, the very act of creating a collage is metaphorically and literally, the act of remaking oneself.”
Andréa Watts

From the outset, coaching with collage enabled significant transformational results for my clients and within the first few years of my business I could see patterns emerging that fascinated me. As an incredibly curious person, I wanted to know why I was seeing the transformations and repetition with the layout of collages, interpretation of certain images and the meaning ascribed to cutting or tearing. I began research years before I secured the contract to write the book and these initial findings formed the basis of my talk the ‘Science Behind the Art’, which became the foundation of the book.

As the first book dedicated to coaching with collage, I introduce you to the Collage Coaching Technique™. This three-stage creative process unlocks unconscious thinking, enabling profound psychological insight for clients through a deeper and faster exploration of emotions and behaviours.

As a comprehensive resource, I share in-depth information and research including coaching with the unconscious mind, meaning-making through symbolic images and visual metaphors, embodied cognition, the neuroscience of creativity, and the role of storytelling. Case studies, client reflections, and my personal experiences feature throughout, illustrating and enriching the theory.

The book aims to instil creative confidence in coaches so you feel equipped to use this transformative technique in your practice. As such, it is inspirational and essential reading for anyone starting, reviewing, or deepening their creative coaching journey.

This blog post contains extracts from the book ‘Collage as a Creative Coaching Tool: A Comprehensive Resource for Coaches and Psychologists.’ These are denoted in italics.

About the author: Andréa Watts is the first specialist in coaching with collage. She is the founder of UnglueYou® and coach, trainer and speaker at her business. Andréa holds positions of Honorary Lecturer at City, University of London (Organisational Psychology Department), and was the Coaching in Context module lead at Birkbeck University on the Coaching Psychology Programme.

As an accomplished coach, facilitator, trainer and speaker with individuals and groups, her clients include multinational corporations and universities.

To enable this ambition, she trains coaches to use the ICF (International Coaching Federation) accredited methodology she developed. To share her knowledge, Andréa authored ‘Collage as a Creative Coaching Tool: A Comprehensive Resource for Coaches and Psychologists’, published by Routledge in 2022.

Published by Routledge in July 2022, Andréa’s book is available to purchase from Routledge.com, Amazon, Barnes and Noble and selected high street book shops. The SDF community can enjoy a 20% book discount when purchasing ‘Collage as a Creative Coaching Tool’ from Routledge. Just use code CCCTN at the checkout, valid until 30th November 2022.

In the face of recent #political, #Economic and #Health challenges, it makes sense for organisations to upskill staff to boost #resilience. But what you believe to be true about resilience – and how to build it – might be wrong.bit.ly/3DplqB5@TrainingZone pic.twitter.com/qElp…