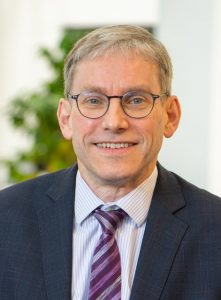 Professor Andy Schofield is the Vice-Chancellor of Lancaster University. As Vice-Chancellor he is the Chief Executive of the University and has overall responsibility for its operation and strategic direction. He took up the role on 1st May 2020.

Professor Schofield was previously Pro-Vice-Chancellor and Head of the College of Engineering at the University of Birmingham from 2015 until April 2020.

Andy is a theoretical physicist working in the area of condensed matter physics specialising in correlated electrons. He works closely with experimental groups who develop and study new materials using high precision techniques at low temperatures to understand how emergent properties like superconductivity, magnetism and novel metal behaviour arise.

Andy studied Natural Sciences followed by a PhD at Gonville and Caius College, Cambridge where he was appointed to a Research Fellowship in 1992. He moved to the USA in 1994 working at Rutgers for two years before returning to Cambridge. In 1997 Andy was awarded a Royal Society University Research Fellowship to work on theories of non-Fermi liquids. In 1999 Andy moved to the University of Birmingham and was promoted to Professor of Theoretical Physics in 2002. In that year he won the Institute of Physics’ Maxwell Medal and Prize for work on the emergent properties of correlated electrons. From 2008 Andy occupied a number of leadership positions within the University of Birmingham including Head of the School of Physics and Astronomy before becoming Pro-Vice-Chancellor.

Gamification has unjustly garnered a bad name in the past but, when used properly, it’s a perfect way of driving the behaviours you want to see in your learners.trainingzone.co.uk/d…#gamification #training