In any educational institution, learning is at the heart of what we want to happen. Students are learners – but so are all the other people around them – teachers, researchers, and all kinds of supporters. Naturally enough, just about everyone involved in teaching and learning thinks a lot about what is to be learned, but in my view we don’t think enough about how this learning might best happen. There has undoubtedly been a great deal written and said over the millennia about how humans learn. As with anything else, just about half of this is less useful than average! There’s also a great deal of written and spoken critique of ways of thinking about how human learning happens, and what you’re reading now is just one bit of this.

I’ve for a long time disagreed with the approach of trying to divide ways people learn into ‘learning styles’. Back on 13th March, 2017, a letter appeared in ‘The Guardian’, signed by a range of eminent neuroscientists and educators, trying to put learning styles firmly to rest, and an accompanying article decrying the ‘neuromyth’ of learning styles. Both articles remain available on the Guardian website, and I think they represent a breath of fresh air and sanity in the business of trying to pigeon hole human beings into categories.

Yet everywhere I go, I meet people who still believe in learning styles, and the associated instruments for categorising people into a relatively small range of ways they go about their learning.

Most of these instruments depend on multiple-choice questionnaires which people are given to fill in, followed by analysis of their responses. Typically, people are asked to pick which of four options is most like them. But is this sensible? Sometimes, people may well pick which of the four they believe is most like them. Alternatively, they may survey the options and think which of these is the ‘right’ answer. Or they may choose the answer they’d like to be most like them. They may not even be aware of which of these things has happened when they make a choice. Despite all this, the responses are deemed to be valid and reliable, and are turned into a so-called ‘statistical analysis’ of their ‘learning styles’, from which many feel they are quite unable to escape.

Long ago, when I started working with students, I began to ask them how they learned best, and what went wrong with their learning, using open-ended questions and listening to their responses and reading what they wrote about how they thought they learned. As I got more and more interested in how learning happened, and less obsessed about what was being learned, I started to extend the range of people with whom I explored their own ways of learning, and over the decades have now posed these questions to over 200,000 folk, ranging from students of all disciplines, teachers, professors, priests, accountants, economists, scientists – just about everyone. I began to identify widely shared common factors from the responses I got to my questions. I particularly wished to avoid jargon, and keep things in straightforward language. My pet hate in the jargon surrounding some of what has been written about learning is ‘abstract conceptualisation’, the meaning of which no-one seems to have any idea! Whatever it is, I’m sure it may well take place, but I sincerely doubt that one can sit down and purposefully do it for half-an-hour.

As the picture of the factors involved in learning emerged from all the responses I got, I became hostile to the notion of ‘learning cycles’ as well as the concept of ‘learning styles’. Every individual has their own way of addressing the factors involved in learning, and pigeon-holing these into defined cycles or styles becomes all the less sensible. The factors involved in learning all interact with each other, and don’t happen in a particular set order. Every learner handles each of these factors in his/her own way – an infinite freedom of how they contribute to learning happening. Over the years I’ve written about these factors (including Race, 2014 and Race, 2015), and about how we can address them in our curriculum design, assessment, feedback, and the design of learning resources both paper-based and electronic. So what are these factors which keep appearing in people’s descriptions of how they learn? I’ll present them here, but don’t take any notice of the order below, as I’ll then suggest that they all interact with each other, rather like ripples bouncing backwards and forwards when you drop a pebble into a pond.

Learning by doing – practice, trial-and-error, repetition, having-a-go, experimenting and so on
This could be called experiential learning, but see how many kinds there are. It’s not just reading, or listening, or memorising – though all these can be involved.

Wanting to learn
I don’t like to call this ‘intrinsic motivation’ but it’s about the same thing. ‘Wanting’ feels more purposeful, intentional, and plain human. When people really want to learn something, there’s every chance they will succeed. Conversely, if we don’t want to learn something, it’s not surprising that we’re much less likely to succeed.

Learning from feedback – other people’s reactions – praise, criticism, seeing the results, and so on
This often follows on from the ‘doing’ processes mentioned already, but we can learn not just from feedback on what we’ve done, but equally on feedback relating to what others have done.

Making sense of things, getting our heads around them
I always hesitate to use the word ‘understanding’, as one never knows when one’s actually completed this – if one ever has! This can of course happen while doing things, and while getting and reflecting on feedback.

Verbalising – putting it into spoken words – explaining, teaching, coaching
Think of something you’ve taught or explained to other human beings. Did you find that after you’ve put it into spoken words, you had your own head around it a lot better than beforehand? Most people find this.

Making judgements – learning through assessing
This can include judging things against given criteria, deciding on strengths and weaknesses, putting things into order of priority, assessing one’s own drafts, judging peers’ work, rating presentations and so on. This proves to be a way of internalising assessment criteria, so that one automatically tries to meet them when producing assignments or papers, or giving presentations and interviews.

Fun and play.
This can span all of the processes mentioned above. Watching my grandchildren learn in the last few years has reminded me just how much learning happens through play. This naturally links to the want to learn, and the kinds of doing which are enjoyable, and the kinds of feedback which really work, and the pleasure of talking and explaining, as well as judging. I’m not suggesting that all learning has to be fun, but the more the better. If we’re enjoying something, there’s much more likelihood that we’ll return to it, and spend longer on it.

In my published work on factors underpinning successful learning, I’ve often included a diagram representing how these factors all interact with each other, and the figure below is from a slide I use at workshops about learning. Fun is not given a separate ‘ripple’, but I explain that it can be a background to any of the processes wherever possible. 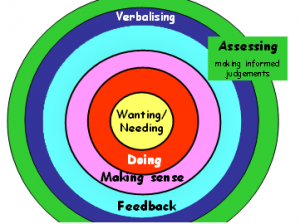 Prof Phil Race gives keynotes now and then, and runs the odd workshop on higher education teaching, learning, assessment and feedback. Originally a scientist, he has been an educational developer for a long time now! He is known for his work on the factors underpinning successful learning, ‘ripples on a pond’.
He is a visiting Prof at Edge Hill University and Plymouth University, and Emeritus Prof from Leeds Beckett, and lives in Newcastle-upon-Tyne. He is a National Teaching Fellow, and Principal Fellow of the HEA. He has published books and articles for many years, and is probably best known now are ‘The Lecturer’s Toolkit’ (4th edition: 2015) and ‘Making Learning Happen’ (3rd edition: 2014). He is known for involving participants actively in workshops and keynotes, and giving them lots of post-its to fill in and exchange, and for his dislike of unnecessary educational jargon!