The Teaching Excellence Framework is a government-run exercise to evaluate the quality of the undergraduate student experience in higher education institutions. Participation – by universities, colleges and private providers – is optional, and the consequences differ by nation of the UK as the funding and regulatory systems differ. The formal guidance on TEF can be found on HEFCE’s website here.

Where did TEF come from?

While policies to promote excellence in teaching have a long history in UK higher education, TEF’s origin is in the Conservative government’s manifesto for the 2015 General Election, written by the now Universities and Science Minister Jo Johnson. In the Cameron, then May, government higher education policies were developed through a Green Paper (2015), White Paper (2016) and the Higher Education and Research Act(2017).

Why does TEF exist?

There is mixed evidence for what Jo Johnson has called “lamentable teaching” in UK universities. There is concern, expressed by Johnson and David Willetts, a predecessor as minister, that research is privileged over teaching in universities and that that imbalance is inappropriate. Willetts wrote a pamphlet for the Social Market Foundation whichexplained this in more detail in 2013.

The Government has introduced the TEF as a way of:

How does TEF work?

Each institution is presented with six metrics, two in each of three categories: Teaching Quality, Learning Environment and Student Outcomes and Learning Gain. For each of these measures, they are deemed to be performing well, or less well, against a benchmarked expectation for their student intake. Those positive and negative ‘flags’ add up to a provisional categorisation. When entering TEF, institutions also submit a provider statement (maximum fifteen pages) whether they can comment on their data and add in other information. For more information, see Wonkhe’s visual guide to TEF and read more about the flagging process. 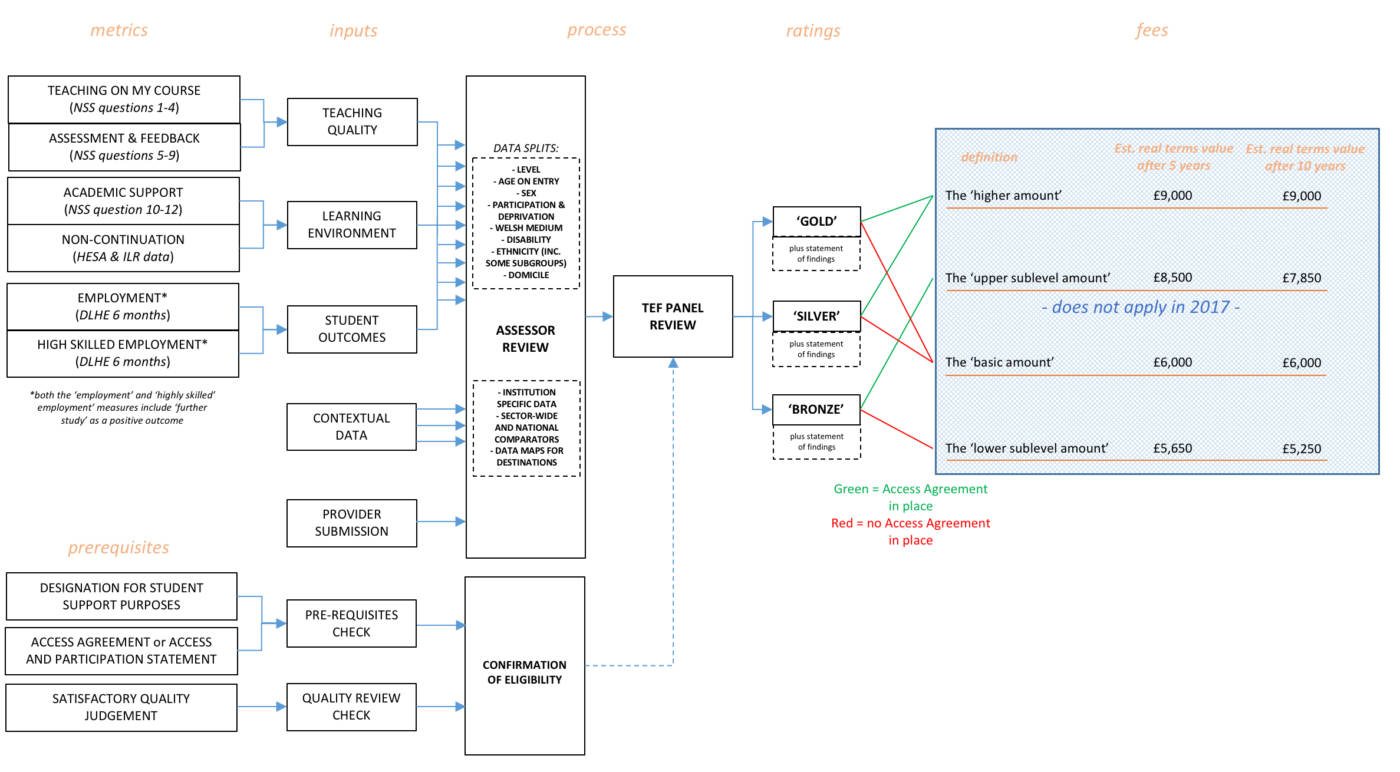 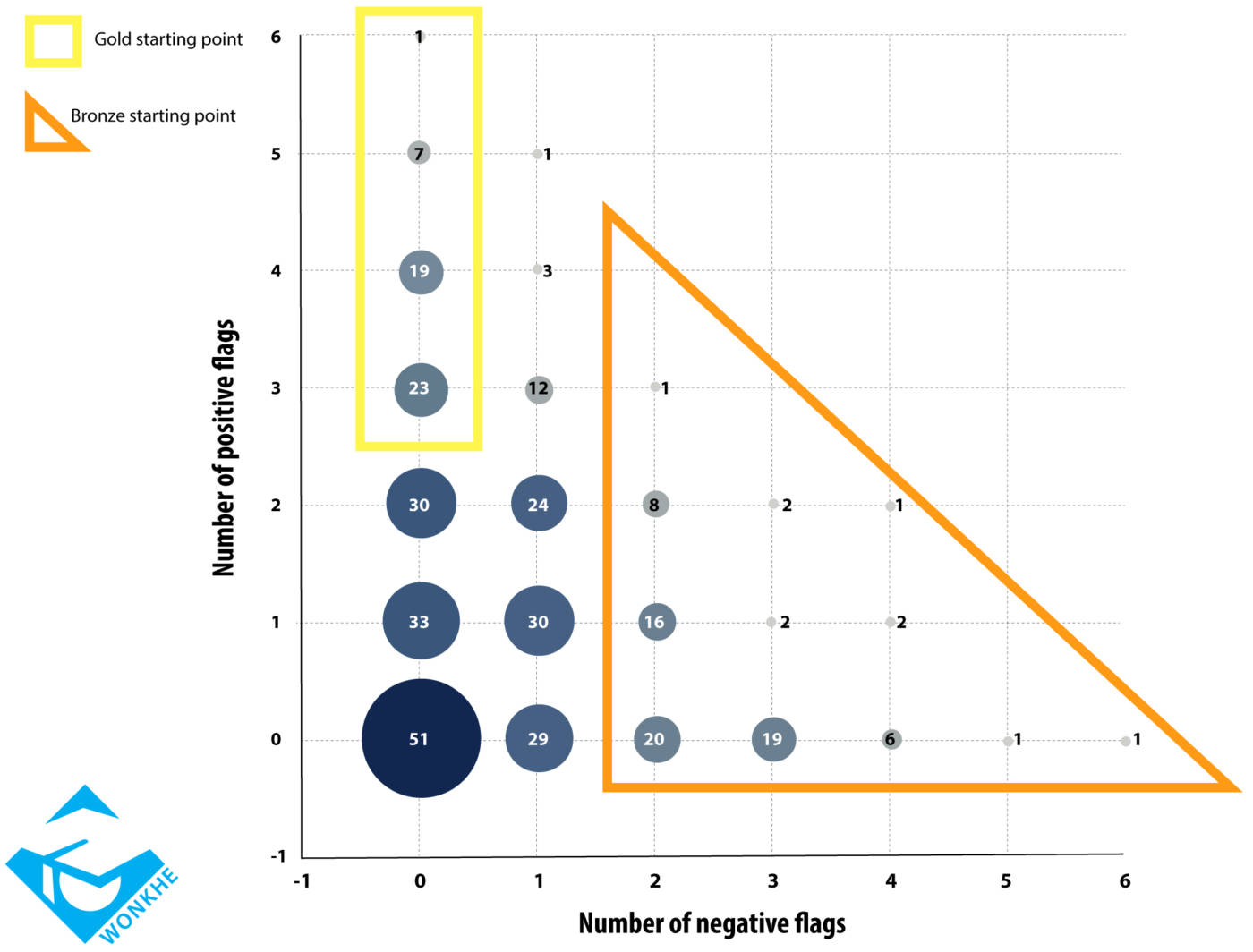 Why have metrics and a provider statement?

The provider statement allows for institutions to make a case for why they should reach a higher level than their flagged metrics might suggest. They have an opportunity to provide additional evidence to make the case for a higher rating.

Is TEF different to the existing university league tables?

Yes, very much so. TEF will be an distinct evaluation of universities’ ‘performance’ for three main reasons:

And of course, unlike other university league tables, TEF is being run by the government.

What’s the difference between TEF and REF?

The Research Excellence Framework (REF) is a periodic exercise in which individual academics’ research is judged by a panel of peers. The results, alongside an evaluation of the research’s impact and a judgement on the ‘research environment’ in an institution, are used to determine a large amount (over £1 billion per year) of funding received by universities.

TEF does not have the same link to funding, and while its results will likely have an impact on prestige, it is well-established that research performance has historically been more important to perceptions of prestige. For more information on REF, see the Stern Review, including its section on the history of research evaluation here.

Are REF and TEF of comparable value to universities?

It’s not clear whether TEF will have as much importance to universities as REF; it will likely depend on the individual university as some have more of a research emphasis and some focus more on teaching.

Eventually, the plan is to link TEF outcomes to the maximum level of tuition fee that universities can charge to home students which should provide a direct financial incentive to do well on this measure alongside the indirect effect of the TEF judgement making the institution more or less desirable to student applicants. The link to differentiated fees has been delayed until 2020 at the earliest.

How does TEF work with current quality assurance work?

TEF is supposed to differentiate institutions above a baseline standard determined by pre-existing quality assurance systems.

What will the results of TEF be?

Institutions will be judged to be Bronze, Silver or Gold by the TEF exercise in ‘year 2’. The categories were determined following a technical consultation on TEF’s operation. More information on the consultation response can be found here. For most institutions – those with three years worth of data for the exercise – the judgements will last for three years, though they can reapply earlier if they want to (because they think they’d be able to upgrade their level).

How are TEF submissions assessed?

There are TEF assessors who make an initial judgement on each provider with their conclusions being sent to a panel which confirms the final judgements. The list of assessors and panel members can be found here.

Why is TEF controversial?

TEF doesn’t really measure university ‘teaching’, so it’s badly named. The input metrics are based on student satisfaction measures, retention and employment, all of which would be better badged as ‘student experience’ rather than teaching.

Aside from that, there have been complaints about the process, and in particular, there has been a challenge to the benchmarking element of TEF, with the Russell Groupquestioning the value of this approach and critics calling it ‘a statistical wonderland’ that will confuse applicants to university. There has been further concern about the particular ways in which the metrics flags are calculated. Several members of the House of Lords criticised the TEF during debates on the recent Higher Education and Research Act.

While TEF is primarily an English exercise (with a plan to impact on fee levels for institutions in England), there are participants from across the UK; the policy hasconsequences for the UK’s nations and their devolved higher education systems. And, by the way, the Department for Education broke its own rules on which institutions were allowed participate.

Fundamentally, TEF is controversial because some prestigious institutions – specifically Russell Group universities in London – are likely to have their poor National Student Survey results further highlighted through the exercise. There are some who believe that these universities have neglected their students and so deserve this outcome, and there are others who do not. Whether TEF is the spur to action to improve student satisfaction in these universities is unclear.

What has the NUS boycott of NSS got to do with TEF?

Because TEF was designed to differentiate and increase the fees universities could charge students, the National Union of Students urged its members to boycott the National Student Survey. Not everyone agrees that a boycott is an effective tool against TEF. The boycott has successfully made NSS results unusable for one year in a number of universities, including Bristol, Manchester, and Cambridge.

What impact will the TEF have?

We don’t yet know the extent to which prospective students will use the TEF results to make decisions about where to study. There’s already been anecdotal evidence that universities have looked for ways to improve their performance against the metrics in use in TEF.

What’s the future for TEF?

There will be a pilot of subject-level TEF, and there’s a possibility that the exercise will be extended to taught postgraduate provision at some point in the future. The move to metrics-based assessment will likely continue, and institutions are working to get their data in order to prepare for future iterations of the exercise.

To find out more about TEF, including commentary, analysis, and debate, search through Wonkhe’s TEF archives.

This article was originally published in WONKHE. Founded in 2011, Wonkhe (pronounced wonky) is the home of higher education wonks: those who work in and around universities and anyone interested and engaged in higher education policy, people and politics.

In the post-pandemic university, LGBT+ staff networks must take a new role as confidential forums for peer-to-peer social and mental health support:sdf.ac.uk/8680/redef…#LGBT+ pic.twitter.com/cuhY…