Developing a network of coaches

On Friday 7th April from 12 to 1 pm, UK time, the SDF hosted its first Coaching Tweetchat. This is an initiative the SDF is leading to explore social media conducive to learning and collaboration. Ultimately, the SDF seeks to strengthen communications within its community and supports SDF members and friends “coming together” in order to look into new and innovative learning formats, exchange knowledge and learn in collaboration with others. So far the experiment is working.

On Twitter engagement, 63 users tweeted during the majority of the day on Friday 7th April. The number of tweets, using the hashtag #coachingHE, reached its peak on Friday with 351 tweets. Many of those users were SDF members and friends, who helped disseminating the Coaching Tweetchat across their networks. Tweetchat participants and promoters had a strong interest in Coaching, Learning and Technologies, Academic Development and Leadership.

It was fantastic to see coaches from different networks engaging in the Coaching Tweetchat discussion. We were pleased to see joining us Vitae, a non for profit organisation leading world class professional and career development of researchers. We had colleagues joining from University of Portsmouth, University of Westminster, University of Salford, The University of Manchester, Canterbury Chris Church University, independent Learning  and Development consultants and coaching companies.

The Coaching Tweetchat followed best practice, which is adopted by established Tweetchats in the Higher Education sector such as #LTHE, however such best practice has been adapted to suit the needs of the SDF community and audience. Usually Tweetchats meet on a weekly basis and engage in conversation during the evening. The Coaching Tweetchat runs on every first Friday of the month from 12 to 1 pm UK time. The next two dates are 5th May and 2nd June. Date and time will be reviewed after the June Tweetchat.

The Coaching Tweetchat also followed the format and conventions typically adopted in the Twitter-sphere. The session began with an ice-breaker, which focused on eliciting how participants regard their own coaching practice. Responses inspired the next Word cloud. The Tweetchat host, your SDF Communications Officer, welcomed participants, released a series of announcements, the ice-breaker and 6 main Tweetchat questions for the discussion. Check the Storify for the Coaching Tweetchat Launch. 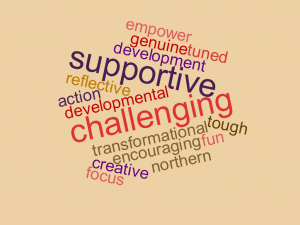 A few more colleagues have joined or are considering joining the Coaching Tweetchat organising committee since the last update. These are professionals who are passionate about coaching and exploring social media tools for collaboration. Some are strong Twitter users and others are getting introduced to the tool. The SDF would like to keep this balance. The Coaching Tweetchat organising committee defines the direction of the Tweetchat, the themes for each Tweetchat session and the questions the Tweetchat seeks to discuss.

The SDF listens to feedback in regards to how to support Tweetchat engagement. Prior to the Tweetchat, the SDF organised an informal “get together” in London with three colleagues who were joining Tweetchats for first time. Whilst I was hosting the Tweetchat, they asked questions and provided each other support. They also discussed some of the responses and proposed suggestions to help engage others new to Tweetchats. Suggestions were about re-tweeting the questions for those who are catching up and have arrived late and organising informal “get together” to support those who wish to take part in the Coaching Tweetchat.

For many SDF members, coaching is regarded as an established theme in the community. A comment I hear a lot is that the audience of staff and organisational developers continues changing. An apparent characteristic in networks like the SDF is constant movement, where newcomers join Learning and Development departments in Higher Education and others leave. The SDF is working to explore mechanisms that can be used to capture their knowledge, experience and wisdom. Can Tweetchats help us on preserving such learning?

The topic of next Tweetchat is: To coach or not to coach – coachability is the question?

Individuals with all levels of knowledge, experience and/or qualifications in coaching are welcomed to join. You only need:

We would love to hear from you.

The Association for Accredited Learning will be talking about ‘Managing the wellbeing of remote staff’ on Tuesday 24th NovTo book use this link bit.ly/3dPH3eX#learninganddevelopment #SDFest2020 pic.twitter.com/9RIU…

About 3 hours ago from Staff Development Forum's Twitter via TweetDeck

SDF and our strategic partners are excited to announce our Festival of Learning and Development, bookings are now open.

To book and see when our keynote speakers are in action find out here https://bit.ly/37wRPWc